An archaeological expedition to recover two anchors from the wreck of the 1916 gun running ship the Aud took place on Tuesday the 19th of June 2012. The expedition team, comprising interested individuals from Cork, Kerry and Waterford, is jointly led by Dungarvan diver Eoin McGarry and marine archaeologist Laurence Dunne who is based in Tralee. The Aud anchors recovery expedition is licensed by the State and is the culmination of over two years preparatory work that included a number of preliminary dive surveys, research and maritime archaeological input. It is intended to recover a stockless anchor from the bow as well as an admiralty pattern anchor.

The eight member archaeological dive team will deploy from Cobh and operate from the Youghal based vessel the Seahunter while the Rón Carraig will undertake the lift recovery. Both vessels are operated by Gavin Tivy.  A third boat the Harpy operated by Carroll O’Donoghue from Kinsale will also be in attendance with members of the Fenit Heritage Association on board.

The expedition will also be monitored by the Underwater Archaeology Unit of the National Monuments Service of the Dept. Arts Heritage & Gaeltacht. 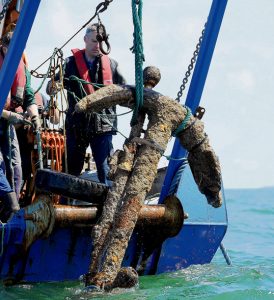 the 1st admiralty anchor comes up from the aud after sinking in 1916. 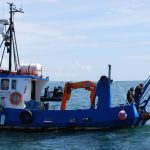 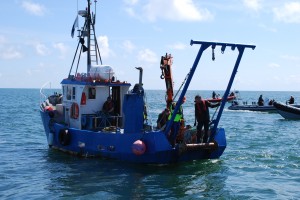 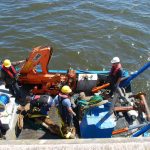 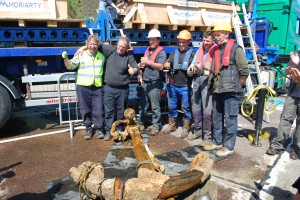 The Aud was originally named the SS Castro when it was built in Kingston-Upon-Hull in 1910. At the outbreak of WW1 it was captured by the Germans and renamed the SMS Libau. In 1916 Sir Roger Casement secretly arranged for the transport of 20,000 captured Russian rifles, 10 machine guns and 5 million rounds of ammunition to Fenit Harbour, Tralee Bay, Co. Kerry to arm the Irish Volunteers.  It was decided that Casement would travel to Fenit separately by U-Boat. The Libau was disguised as a Norwegian ship and renamed the Aud and the secret gun running mission was led by Captain Karl Spindler with a volunteer crew of 22.

After an amazing circuitous journey from Lubeck as far as the Arctic Circle the Aud steamed south past Rockall and along the west coast of Ireland.  Having successfully evaded a number of British Navy patrols the Aud anchored off the Magharee Islands in Tralee Bay on Holy Thursday the 20th April 1916.

For a number of reasons the Aud never landed its cargo and Casement who was landed by U-Boat U-19 at Banna Strand never rendezvoused with it and was himself almost immediately captured.  After leaving Tralee Bay the Aud was captured by a British Naval flotilla off the SW coast of Ireland and escorted to Cobh (Queenstown) in Cork. At the entrance to Cork Harbour, not far from Daunts Rock, Spindler and his crew donned their German Kriegsmarine uniforms and ran up their colours before scuttling the Aud . They were subsequently interned for the rest of the war. 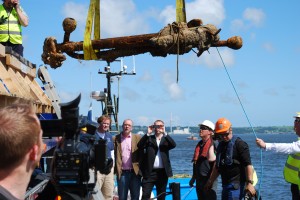 lift off ss aud,s anchor onto tank in cobh 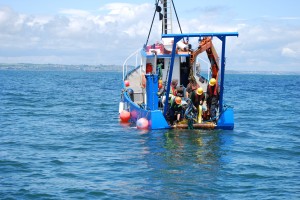 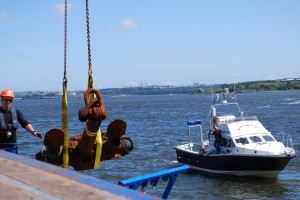